For the people who have never ever ever never camped!

After having gone backpacking a few times, car camping feels a bit like glamping. This is glamorous camping, because you can bring anything you need for maximum comfort, including whole food (as opposed to dehydrated meals) and luxury items like an air mattress, or pillows! Here are some basic camping tips from around the web. 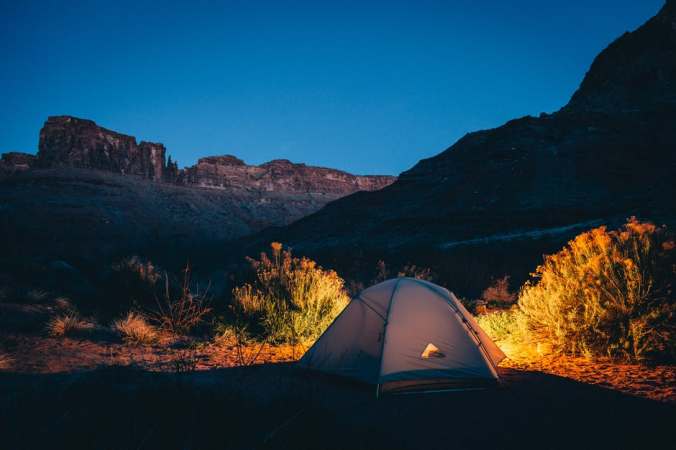 From Liz Stanley of Say Yes
Skip the campground. Campgrounds feel like cities, only you’re closer together. The only thing between you and a bunch of drunk college kids is a thin sheet of nylon. If you’re scared of bears, campgrounds are the worst place because they know that’s where food is. In Yosemite, we saw a couple a day! You are allowed to camp in any national forest or wilderness area surrounding a national park.

WHY IT’S SO WORTH IT: It’s so nice to wake up in the morning when it’s chilly, and have a long hot breakfast with coffee or hot chocolate… Sitting around the campfire at night — drinking a mug of wine, talking, making s’mores — is amazing. Since it gets dark at 8pm, we’ll often hang out for a while yet still go to bed early, which feels so good, too. My husband and I once took a kayaking trip and ended up on a gorgeous lake under the Grand Tetons. We went skinny dipping at midnight. I loved that combination of paddling and camping. It was magical.

Joanna Goddard at Cup of Jo
Do periods attract bears?
Poor Joanna was shamed into sleeping in a cage while camping on a school trip. She reports that periods do not attract bears. Yellowstone reports that polar bears are likely attracted to menstruation, but black bears are definitely impartial. Grizzlies? Unknown…

From Ranger John
Make campsite reservations as soon as you can. Campsite Reservations have become the norm in today’s campgrounds. Packing a car at the last minute on a Friday afternoon and rushing to a park typically leads to disappointment and driving around to multiple campgrounds all with their Campground Full signs posted. You end up camping in your car overnight at the Wal-Mart parking lot or the local motel/hotel with everyone complaining about this being the worst vacation ever.

Pack bacon!  I consider bacon the official torture smell for all Park Rangers. There is nothing like going to work and heading through the campground and smelling bacon cooking everywhere. For some reason, this smell triggers all hunger senses in your brain and you too now want bacon. I will look at my watch and have another 3 1/2 hours to lunch and the sandwich I packed doesn’t smell as good. Of course, I will notice other campers getting up walking to the restroom starring at the campsite next to them cooking bacon, they have this look of wanting to invite themselves over for breakfast too, perhaps the look of plotting how to get the bacon from them devising a scheme used by the famous bear known for stealing picnic baskets. Save yourself this torture and pack your own bacon and be the envy of the campground.

Carry the 10 Essentials! I encourage everyone to carry the 10 essentials with them anytime they head outdoors. It’s the one thing you hope to never need but will also be your best friend if the occasion arises and you do need it. Click here for a list of the 10 essentials you should have with you camping!

From Joanna Hawley of Jojotastic
Use the Airbnb of Camping: When it comes to travel, I have two schools of thought: living like a local via Airbnb and dirt-bagging it by camping. I’m a mix of hi/lo, luxe and earthy. Plus, if I’m camping, often that means I’m also climbing… which equals one very happy Joanna. So you can imagine my excitement to recently discover Hipcamp, which is like Airbnb but with campgrounds, ranches, farms, even a vineyard! This is definitely the option for the adventurous of heart.

John Muir is wilderness famous. With parks and trails named after him, his legacy is a permanent part of American history. This collection of short stories is the easiest insight in to his writing and philosophy on natural preservation. In his stories, he urges readers to not only take part in a great appreciation for nature, but to actively strive to preserve it.

My photo from Muir Woods

I started reading Desert Solitaire by Edward Abbey while living in the Southwest, and Abbey showed me how to slow down and notice the native animals and native rocks and native people in a thoughtful way. When exploring the west, he showed me how to peel away the unnecessary layers of “protection” and go out into nature with only what I needed, in an effort to know the land a little better. His criticism of the National Park System is paralleled by an acknowledgement of its importance- all spoken from the voice of a Moab Park Ranger/ New Yorker. In fact, the friend that recommended the book to me was at the time a Moab Park Ranger/ New Yorker. It is interesting how nature can pull people away from the glamour and appeal of the big city. I loved Desert Solitaire so much that I am currently reading this Collection of Short Stories by Abbey. When searching for these links, I found these Files on Edward Abbey, published by the Federal Bureau of Investigation! Presumably these investigations regard his dissent for the system and maybe acts of eco-terrorism? That is pure speculation, I suppose I need to read these. Related: Journeys of Simplicity, featuring “Traveling Light with Edward Abbey.”

Life in the Woods by author Henry David Thoreau is an American classic. I am embarrassed to say that I have not read it! Any way of life, city or otherwise, during the age of the industrial revolution seems very back-to-nature in our 21st century eyes. With that perspective, in fact, I would argue that the pioneer lives featured in Little House on the Prairie really harken back to nature. Back to Thoreau, his writings are early sources for the environmentalist movement, and like Edward Abbey after him, he was comfortable criticizing the system in place to utilize and preserve nature.

I have always written off my dad’s love for Foxfire books, in part because I didn’t know what they were about and in part because when you are a kid you think your parents are boring. As an adult, though, I realize that my parents and I share an affinity for good books and information, a mutual appreciation for nature and a desire to acquire new skills devoted to a greater sense of self-sufficiency. NPR has a great article about how Foxfire came to be. On the topic of long-term hiking accounts being turned into movies… A Walk in the Woods will soon be made into a film. This narrative details the trek through the Appalachian trail. I have not yet read this, but my sister has and loves it. This is now her bucket list hike. Of course, you can’t talk about books about the great outdoors without talking about Wild. This book is Cheryl Strayed’s account of hiking the Pacific Crest Trail… solo. If you haven’t read it, you might have seen the movie. I know many avid backpackers are annoyed by this book, because they think it makes light of a serious situation, and because it has inspired many people who are unprepared and inexperienced to try this trail themselves. I certainly wouldn’t admit to this book being my first exposure if I was chatting with other hikers on the PCT given the harsh criticism many have given it. All of that criticism being taken into account, however, this book is a story of nature being used as a metaphor for life, and of championing months of meditation through solo hiking. Since reading this book one year ago, I have now taken 2 backpacking trips, and am making a third this week. The “elite” hikers may criticize this story, but it was the first inspiration for me to take my hikes from day trips to multi-day explorations.

“Named after a bioluminescent fungus that glows in the hills of North Georgia on certain summer nights, Foxfire started in 1966, when an English teacher in Rabun County was having a difficult time engaging his students. Out of ideas, he let the kids design the lesson. They chose to publish a magazine that would document the mountain culture all around them.”

With my growing interest in understanding the struggles of Appalachian people, I am inclined to read the whole series. They also have books specific to the topics of music, folk remedies, and of course, pickling and preserving. You can also visit the Foxfire museum and headquarters! I might have to plan a trip for Dad and I.

Intro to Nature Stories: I was raised to have an appreciation for these types of books. Growing up, I read the survivalist stories Hatchet and Touching Spirit Bear. Before that, I had engulfed Where the Red Fern Grows, where all the action happens outside, and of course Little House on the Prairie. As I said before, any pioneer life feels downright in touch with nature because… well, back then you had to be.

Other book lists: Summer Re-Reads, Dystopian Novels that Warned You this Was Coming, and The Most Relevant Book

We just went to the Grand Canyon!

Even better, we backpacked into the Grand Canyon and camped near Colorado River!

Here’s what we took: